ahemm...! All girls love bags...bags of all sorts and kinds and colors and brands, don't we? 'course we do :-) Now, here's Myra.... a working college student all the way from Mindoro (MIN'DORO), Philippines. She works during the day and study by night. She'd seen how I enjoy crocheting....and wanted to give it a hand also. Since I've been very busy doing my crochet stuff, I simply told her to watch youtube videos for beginners because that's what I did before.... The friend who inspired me into crocheting is currently residing on the other side of the globe. Having no one to teach me even the basics, I turned on the world wide web so to speak :-)...Glad I did just that and now, I'm always looking forward for my "me" time....where in I could just sit in any comfortable spot in my house with my hook and my yarn.

Oh, let's get back to Myra...she never did get any lesson from the videos I recommended to her. She said she didn't understood a thing since the videos were all in slang english language. I didn't encouraged her anymore....I thought she isn't really into it or not just interested. Then come summer break, As usual I'm with my hook and my yarn on our kitchen high chair. Suddenly she said she wanted to learn how to crochet. So I handed her a ball of yarn and a hook. Tought her the basics Slip knot, chain, single crochet, double crochet, trebble crochet back to to single crochet then double......after a while her practice piece became longer...she became excited after finally getting it right...and frustrated if she did some mistakes and her work doesn't look nice at all. Her first crochet project was a small square bottomed drawstring pouch. then a simple scarf. She was soo delighted! Then she told me she wanted to make a bag....a sling bag she could take to school. I said okey. But First I made her search through the internet for easy designs...and she found this free crochet pattern summer sling bag. You could find the pattern tutorial here...

She used two colors of light worsted yarn in baby pink and maroon red...size 3.5 mm hook. The pattern itself was easy to follow...I just did the magic ring (although the patterns says chain then join into a circle)and first row for her then she did the rest. she had finished both sides of the bags and the handle....hope she could still endure the final step. she had to assemble them to make it into a sling bag.... and she did! 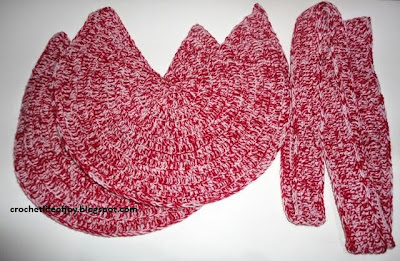 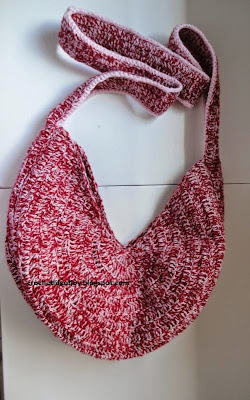 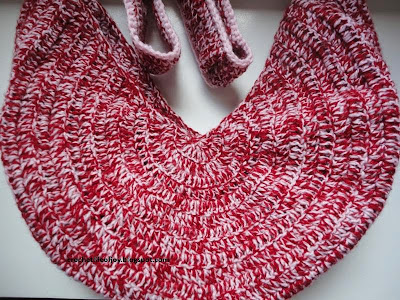 send me a message!